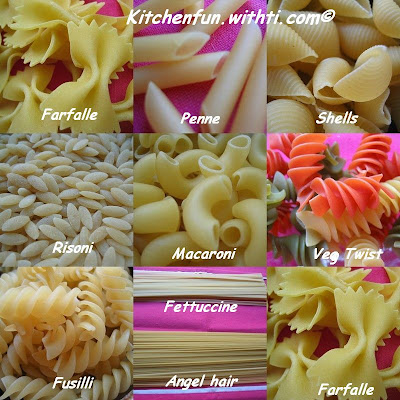 Angel Hair Spaghetti: A thin, very delicate, long pasta, its perfect for using with delicate sauces, such as light cream and salmon or white wine and shellfish.

Fettucine: 5mm-wide ribbon shaped, butter and cream based sauces are good with this pasta shape.

Farfalle: A butterfly shaped pasta, also called bowtie pasta, works well with light sauces, such as fish in wine and cream, or robust sauces such as cheese, and chunky tomato and herb.

Fusilli: The twisted shape of Fusilli holds bits of meat, vegetables and cheese, so this shape works well with any sauce.

Macaroni: Macaroni are ridged, hollow tubes which are cut flat at the ends. This is a very versatile shape which can be used in a variety of ways, with toppings, in salads or in bakes.

Penne: Penne is very popular slanted-edged, tubular pasta shape that suits many sauces. Try with a spicy tomato or a creamy mushroom sauce.

Risoni: Small rice-shaped beads of pasta. Use Risone in soups or you can stuff capsicums or eggplants with a mixture of cooked risone, cheese and sauce.

Veg Twist: A colourful alternative to plain twist shapes. Made from wheat, spinach or tomato flavours, this pasta shape works well in salad.

Shells: This pasta is a great team with a tomato and veg sauce, or to use in pasta salads and pasta bakes that are cheese or tomato based.

How To Cook Pasta:

Cooking dried pasta: Gradually add pasta to a large saucepan of boiling water, making sure water does not go off the boil. When cooking " long" pasta, such as spaghetti, hold strands at one end until the submerged end becomes soft in the water. Gradually lower strands, cooling them neatly. Boil until "al dente" (tender but firm), stirring occasionally so pasta does not stick to base of pan.
Pasta should only be rinsed after draining if being used in a cold dish or if not being served immiediately. In this cases, rinse pasta under cold,running water to stop cooking process, then drain. Uncooked dried pasta can be stored for up to a year in a cool,dry place. Cooked pasta can be refrigerated, covered, for two days.

Cooking Fresh Pasta: Fresh pasta is cooked in much same way as dried pasta, however it requires less cooking time. Gradually add fresh pasta to a large saucepan of boiling water, making sure water does not go off the boil. Boil until pasta is al dente. It will only take a few minutes,so check pasta regularly to ensure it does not overcook. Cooking times for pasta will vary according to individual pastas. (credits for: Australian Table magazine)

History of Pasta has been an Italian tradition for hundreds of years. To passionate Italians, pasta is poetry. They're so devoted to their national dish, there's even a pasta museum in Pontedassio, Italy, filled with antique pasta-making implements and dried specimens of pasta dating back 100 years. The Italian, Marco Polo, has been given credit for introducing pasta to Italy. However, there's evidence that the ancient Etruscans in Italy were eating pasta at least 1600 years before Marco Polo was born. Furthermore, the Chinese are known to have been eating a "noodle-like food" as early as 3000 BC. It is also believed that the Ancient Greeks, Romans and even Arabs had discovered the simple delights of pasta long before Marco Polo was around. In fact, Greek mythology suggests that the Greek God 'Vulcan' invented a device that made "strings of dough". Whatever its origin, there is no doubt that even if pasta wasn't invented in Italy, it was certainly the Italians who perfected the art of pasta making. Dried pasta became popular through the 14th and 15th Centuries, as it could be easily stored on ships setting out to explore the New World. Various types of pasta, including long hollow tubes, are mentioned in the 15th Century records of Italian and Dominican monasteries. By the 17th Century, pasta had become part of the daily diet throughout Italy because it was economical, readily available and versatile.
Thomas Jefferson has been credited with bringing the first "macaroni" maker to America in 1789, but full advent of electricity in the 1900's made life a lot easier for the pasta industry. Machines took over the labour intensive chores like mixing the dough and cutting the shapes. History of Pasta Shapes & Sauces. Many pasta sauces have a long and interesting history. Legend has it that the traditional cream and cheese sauce, Alfredo, takes its name from its creator, a Rome restaurateur called Alfredo. Carbonara sauce was believed to be devised during World War 2, when American soldiers in Italy asked for bacon and eggs for breakfast. The Italians compromised by creating a bacon, egg and cream pasta sauce. And everyone's favourite, Bolognese, originated from the region of Bologna in Italy.
The meaning of 'al dente' 'Al dente' is used to describe when pasta is cooked to perfection. 'Al dente' in Italian literally means "to the tooth". Pasta that is al dente should not be overly firm, nor should it be overly soft. This is often difficult to measure in minutes, as factors such as the temperature of the water, the size of the pot etc will affect the length of time that is required to cook the pasta. San Remo therefore recommends that the product is tested prior to deciding if it is ready. (credits to san Remo Pasta).

Pasta is a type of of food made from a dough using flour, water and/or eggs. The dough is shaped and can be stored. Pasta is boiled prior to consumption. There are many variations of shapes and ingredients that are all called pasta. Some English speakers say that pastas are a type of noodle. A few examples include Spaghetti(solid cylinders), macaroni (tubes or hollow cylinders), lasagne (sheets).
Pasta can also denote dishes in which pasta products are the primary ingredient, served with sauce or seasonings. The word comes from Italian pasta which shares its origins with "paste", meaning "dough", "pasta", or "pastry" as in "small cake". As recently as 1918 the English word "paste" was used instead of or alongside the Italian pasta.(Wikipedia).