As i promised before i finally have a chance to write down this recipe, I'm pretty sure this sweet always been Australian favorite party snack, almost everywhere i went for the party i saw this. Not only kids like them but the adults too! including me :)

I's quite simple and very few ingredients, but always keep in mind that the mixture is very hot when you put them on the patty cases or ice cream cone like mine.

I'm apologize for blurry picture because i forgot to take this picture alone, so i just cropped them from one my food pictures collection. Hay.. hay...
My favorite breakfast back when i liven in Indonesia, apart from fried rice is this Chicken porridge in Yellow broth, the Men usually sell them in the traditional vendor, by walking from one to the other place/ village.

There are few different version of Chicken porridge, mostly people make it without yellow broth, which is similar to the original version from Chinese cuisine. For me i will do whatever it takes to satisfied my food craving :) I will make my favorite food from scratch to get the perfect taste i desire.

In western country, this dish would be suitable for cold weather, just like soup. A bit complicated but worth to try.

Recipe taken from Rurie's blog with a little revised by Me. 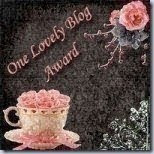 Yay.. this surprise award got my spirit back for blogging :) . I just forgotten to get it from my dearest friend Tata, she was sending me this award last October :O hehe...It's now nearly End of December!.
And she actually telling me to grab this award via FaceBook because i hardly open my blog for a long time to check it :P

I think i won't pass this award until i get back on track again with my blog, until I'm getting an idea who are still active blogging from my friend list.

Once again Ta, for this award, I'm so honoured, even thou I've been lazy to update my blog, but i said i will started to update my blog more often, especially next year, my 3y/o daughter Ellyn will stated her Kindergarten and i will make her Bento lunch/ snack Box for her (i will have a sneak peek on her blog as well, since she's so creative making cute bento).

Keep on blogging Everyone!!
and have a great day.
Posted by Ti at Wednesday, December 23, 2009 0 comments

In the past 2 years, i always made black forest for my birthday, not only because i mastered how to make them ;P .

I also think it's the easiest and shorter time to make.
There are many Black forest recipe on the internet, but i always use the same recipe since i fond it long time ago.

Apart from my latest birthday, I'm enjoying our new house, it's bigger and feel so homy.. because we used to the unit, which is smaller and only had a tiny concrete backyard. My daughter was so happy when she found out that we'll stay here now.

She couldn't wait to harvest our Apple, Plums and peach :) We just lucky to find this house,it has all the criteria i wanted!

Here some of my BF pictures. Look at my daughter, she's busy tasting each one of the cake :) Whoa... seems like ages i neglected my blog already.
I will try.. try.. and try.. very hard to started again updating my blog from now on, i promised ;).
I should push my self to get into this habit again after my long break caused by FaceBooking too much!, hehe...

So, this time i will share my Butterfly recipe i made, for my 26th birthday last week. I actually made the Black Forest cake and honey joys (recipe follow soon) as well. 1. Preheat oven to 180°C/160°C fan-forced oven. Line muffin or mini-muffin pans with paper cases.
2. Using an electric mixer, beat butter, vanilla and sugar in a small bowl until light and fluffy. Add eggs, 1 at a time, beating after each addition (mixture will separate at this stage). Transfer mixture to a large bowl. Stir in half the flour. Stir in half the milk. Repeat with remaining flour and milk until combined.
3. For 1/3 cup-capacity muffin pans use 2 level tablespoons of mixture. Bake for 15 to 17 minutes. Alternatively, for 1 tablespoon-capacity mini muffin pans use 1 tablespoon mixture. Bake for 10 to 12 minutes.
4. Stand cakes in pans for 2 minutes. Transfer to a wire rack to cool.